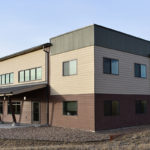 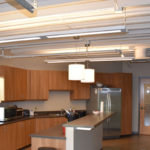 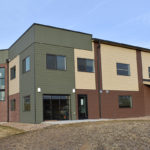 The Phoenix Financial Group relocated their offices and call center to a newly-renovated 12,000 square-foot building in Westminster, which included the addition of a new 7,730 square-foot wing, for a total building area of 19,730 square feet on a 2.5 acre site.

The focal point of the project is a 3,200 square-foot call center, which is composed of a 2-story, high-bay roof structure. The project scope also included construction of perimeter offices, kitchen, break room, employee restrooms, and a bike storage room surrounding the call center. The remodel of the existing building included demolition of an existing stairway, which was in-filled with structural floor deck, giving both the first and second floors approximately 250 square feet of additional rental space. A new stairway and elevator were installed in the building addition.

The existing siding and exterior soffits were overlaid with new materials to match those on the call center addition and new windows were cut-in to the existing brick exterior.

Explore our other Market Sectors:

General Commercial
Healthcare
Advanced Industries
Corporate Interiors
Public Sector
We're happy to answer any questions you may have, feel free to call us at 303-696-5800